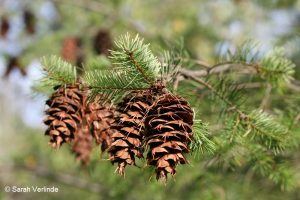 Douglas-fir is a fixture in many forests across the Pacific Northwest. The thick bark of the Douglas-fir make them fire resistant to moderate surface fires. The cones and needles provide a large portion of the blue grouse’s winter diet. The foliage and twigs are also eaten by deer, elk and mountain sheep. It is not a true fir tree, which is why we hyphenate the name: Douglas-fir.

Douglas-fir wood was regarded as an optimal fuel source by many coastal tribes. The wood was also used to create spear handles, pid-net poles, harpoon parts and other items. The pitch was used for torches as well as being used as a medicinal salve. The pitch was also used to help make containers water-tight.  Douglas-fir needles were brewed into a medicinal tea to treat joint pain. Douglas-fir is used commercially as well, its wood is often used to make telephone poles and they are a popular species grown for Christmas trees.

This article was written by Jessica Rouske and Sarah Verlinde-Azofeifa.   For questions regarding the EERC Native Plant Guided Tour, contact Sarah at severlin@uw.edu.